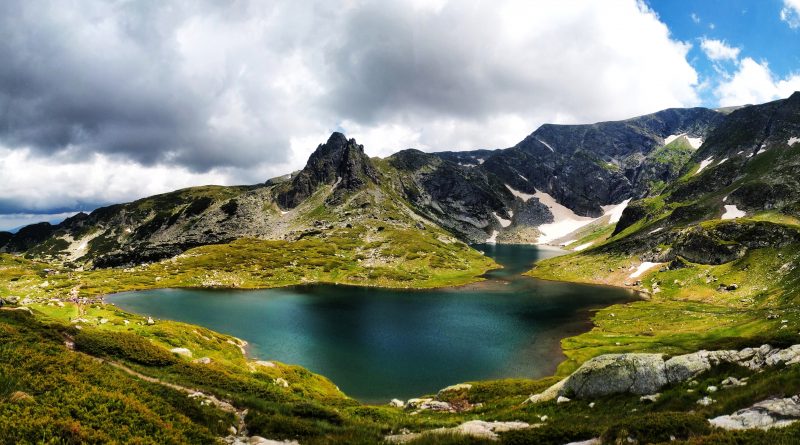 The treasures of Bulgaria & Macedonia

Arrival in Sofia. You will be transferred to and accommodated at 4* Ramada Sofia hotel (or similar).

Next is a walking tour of Sofia and a visit to the most interesting historical sights: the Alexander Nevski Cathedral, the St. Sofia Church, which had given the name of the city and the historical and cultural center of the capital.

In the afternoon you will visit the famous Boyana Church – situated at the foot of Vitosha Mountain in Sofia. It is one of the few medieval monuments of Christian art that have survived until the present day. The church was included in the list of UNESCO World Heritage Sites in 1979. Boyana Church owes its global fame mainly to the wall-paintings of 1259 which demonstrate the exceptional achievements of the Bulgarian medieval culture. Each of more than 240 figures depicted in the church has unique individuality and high artistic value.

After breakfast – departure to the Seven Rila Lakes which are without a doubt one of the most notable natural attractions on the Balkan Peninsula, a dream destination not to be missed. Their beauty touches thousands of Bulgarian and international travelers who visit them. On the way you will take a cable car from which you will witness the incredible beauty of the Rila Mountain.

In the late afternoon you will head towards the picturesque mountain resort – Bansko. You will

be accommodated at the 4* Casa Karina Hotel (or similar).

Free evening program and overnight at the hotel.

After breakfast you will take a city tour. There are multiple museums and landmarks in the

town. 130 architectural and historical monuments of culture are registered, seven of which are of national significance. The architecture of the typical houses in Bansko from the period of Revival (18th – 19th century) can be seen on the territory of the town. The Velyanova house is one of the best models of the Revival architecture. It was built in the 18th century, and nowadays it is declared a monument of culture with national significance and a model of the architectural type of reinforced house. The unique wall paintings and fretworks on the ceilings are made by the artist Velyan Ognev. The church “St. Trinity” is a basilica with a nave and two aisles, built in 1835 by local builders. It was the largest one in Bulgaria, before the construction of the monumental temple “Alexander Nevski”.

after the Battle of Belasitsa in 1014, who arrived in the area en route to the Rila Monastery and discovered a holy spring that allegedly cured them. Dobarsko is first mentioned in Tsar Ivan Shishman’s donor’s charter from the Rila Monastery in 1378. Dobarsko is known for its 25-metre waterfall, Shtrokaloto, its two old Eastern Orthodox churches and the many consecrated grounds and chapels in the area, as well as the view of three of Bulgaria’s highest and largest mountains from the village. At this magical place you will enjoy a folklore performance from a choir of local women.

Optional: Lunch at a local guesthouse.

Your journey will continue with Melnik – the town of the sand pyramids. The town is an architectural reserve and 96 of its buildings are cultural monuments. With a population of 385, it is the smallest town in Bulgaria, retaining its city status today for historical reasons. Melnik is famous for its wine production and you will be able to witness that first hand by doing some wine tasting at a local winery.

Accommodation and overnight at the 3* Park Hotel Melnik.

Mountains in southwestern Bulgaria, nestled in the Melnik Earth Pyramids. It is one of the few medieval Bulgarian monasteries well preserved until today. The monastery reached its apogee in the 19th century, when it was a regional centre of Orthodox Christianity and owned a lot of land in the area. Famous Bulgarian revolutionary Yane Sandanski’s grave is located near the monastery.

Next on your itinerary is “Rupite” – a protected area, famous for its healing mineral springs with a temperature of 74° C. The memorial temple “St. Petka of Bulgaria”, built in 1994 is situated in the locality of Rupite. The locality is mostly famous as a place related to the prophet Vanga, and by this it attracts thousands of worshippers and tourists. Vangeliya Gushterova (1911 – 1996), is the full name of the prophet, famous around the whole world with her multiple prophecies which had come true. In the last years of her life, Vanga lived in a small house in the Rupite, because according to her relatives she considered the area an energy source and collected her powers from it.

After this mystique and powerful place your journey will continue towards Macedonia and the city of Stip – the largest urban agglomeration in the eastern part of the Republic of Macedonia, serving as the economic, industrial, entertainment and educational focal point for the surrounding municipalities. You will enjoy a city tour of Stip which will include the ruins of an old castle which keeps a watchful eye on the town from the Isar Hill and the monastery church of St Michael under Isar hill (built in 1332 by protosevast Hrelja – the same historical figure that renewed the Rila Monastery and moved it to its current place). You will walk along the old parts of the town where (and especially in Novo Selo) some houses built in the Old Macedonian style of architecture can still be found.

Accommodation at the 4* Urbanista Boutique Hotel (or similar).

After breakfast you will continue to Prilep – nicknamed “The city under Marko’s towers” (referring to the fortress). The city was the capital of the medieval kingdom of Kings Volkasin and Marko which explains the large number of churches and monasteries in and around the city. What is most striking about Prilep is the strange bare scenery with huge rocks scattered around. The city is nestled below a bare hill. On the top of the hill, ruins of a medieval fortress stand. One of the curious facts about Prilep is that the whitest marble in the world was found there. The marble is called “Sivec”. The pedestal of the Statue of Liberty is made of Sivec, and the marble has also been used in building the White House and other buildings in Washington, D.C.

Next on the itinerary is Bitola – a city in the southwestern part of the Republic of Macedonia. It has been known since the Ottoman period as “The City of The Consuls”, since many European countries had consulates in Bitola.

Bitola is one of the oldest cities on the territory of The Republic of Macedonia, having been founded as Heraclea Lyncestis in the middle of the 4th century BC by Philip II of Macedon. The city was the last capital of Ottoman Rumelia, from 1836 to 1867. You will walk along the long pedestrian street Sirok Skokak and visit the spectacular Clock Tower.

In the afternoon you will head to Ohrid. There you will be accommodated at the 4* Millenium Palace Hotel (or similar).

After breakfast – you will enjoy a tour of Ohrid – the sublime lakeside point that for many represents the culmination of the Macedonian experience, a kingdom of light and water, a repository of ancient ruins. Ohrid’s major attractions are all located within a remarkably concentrated and eminently walkable area, among and above the narrow streets of the Old Town. As for the lake itself, it is so large and so deep that one might mistake it for a small sea. Numerous churches alongside Ohrid’s lake shores make for fascinating side trips and walks. The wooded ridge above the lake’s eastern shore is largely taken up by the National Park of Galichica, an unspoiled wilderness ideally suitable for nature enthusiasts. The uniqueness of Lake Ohrid and the city’s historical architecture has been attested by UNESCO, honoring it with an official designation on the cultural institution’s list “World Inheritance”.

In the afternoon you will have a boat cruise – 1 hour with panoramic view of: Samuel’s Fortress was is coming from 10th century, the Church of St. Sophia is one of the most important monuments of Macedonia, housing architecture and art from the Middle Ages, Down Sarai of ottoman empire, Fisherman sattelment, Saint John at Kaneo – a Macedonian Orthodox church situated on the cliff over Kaneo Beach overlooking Lake Ohrid in the city of Ohrid, Republic of Macedonia and Tito’s villa – a complex of state villas in Ohrid, Macedonia. The villa complex includes the villa of the president of Macedonia, the villa of the prime minister, and the villa of the ministry of police and several villas of public administration.

After breakfast you will take a trip to Tetovo – a city that has been under many different empires from the Mycenae and Illyrians, to the Romans, Byzantines and Ottomans, giving the city a vast range of diverse cultures. The main attractions of Tetovo are its historic areas and structures – “The Šarena Džamija (“The Painted Mosque”)”, “The Baltepes Fortress”, “The Arabati Baba Teḱe”, “The Saat Mosque” (“The Clock Mosque” as the name implies it used to have a clock in its minaret), and the “Kumluk Mosque” (“The Sandy Mosque” an old mosque in the upper bazaar area of Tetovo. The name is derived from the reddish-yellow exterior of the mosque.) There are three stone bridges in Tetovo and each cross the Pena river. The bridges are some of the oldest structures in Tetovo. Most of the old heritage buildings are situated in the old town, near the centre of Tetovo.

Next is Macedonia’s capital – Skopje. Upon arrival you embark on a city tour on which you will visit the “Macedonia Square”, the “Stone Bridge”, the “Holy Savior Church” and many other remarkable landmarks.

Accommodation and overnight at the 4* Duvet Center hotel (or similar).

After breakfast you will head back to Bulgaria and more specific, one of its most popular landmarks – the Rila Monastery. The monastery lies in the recesses of Rila Mountain, between Rilska and Drushlyavitsa Rivers, at 1147 m above sea level. Rila holy cloister was founded in the first half of the 10th century. Throughout the centuries Rila Monastery has always been the spiritual, educational and cultural center of Bulgaria. In 1976 it was declared a National Historical Reserve and in 1983 it was included in the List of World Cultural Heritage of UNESCO. The church preserves the coffin with the relics of founder of the monastery St. Ivan of Rila, the 12th century Virgin Hodegetria wonderworking icon, the 17th century St. Ivan of Rila wonderworking icon, and many other iconostasis and icons from the 19th century.

After this magnificent landmark of spiritual enlightenment you will head for Sofia where you will be accommodated at the 4* Ramada Sofia hotel (or similar).

After breakfast – departure for Sofia Airport and flight back home.