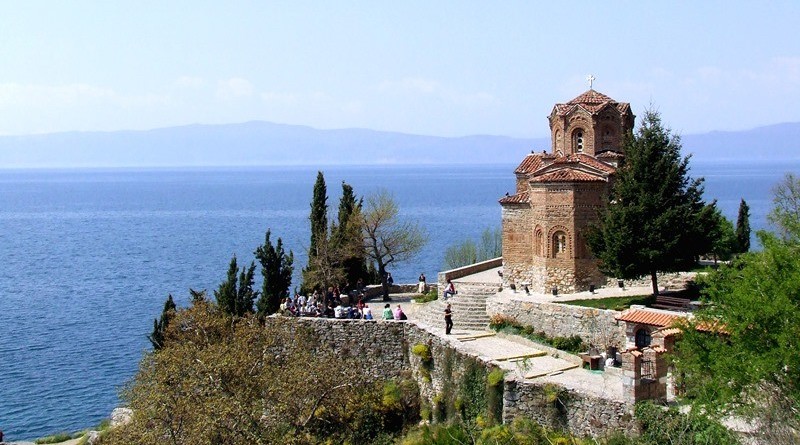 Arrival to Sofia. Transfer from the airport and Accommodation in 4* hotel. Dinner and overnight

After breakfast – departure to Veliko Tarnovo – the capital of the second Bulgarian Kingdom. Panoramic tour around the city with visit to the historical hill Tsarevets with the Fortress, the Patriarchal hurch and the Emperor Baldwin’s Tower. You will walk along the old Trade Street – Samovodska charshia.

Next is visit of Arbanassi village, famous for its ancient rich decorated churches and magnificent architecture. It used to be a residence of the Bulgarian kings. Accommodation and overnight in a 4* hotel in Veliko Tarnovo.

After breakfast – departure to Gabrovo – the capital of humor. Visit to the “House of the humor” with its exhibition of caricatures, carnival masks, costumes and other attractions, which will cheer you up. Next follows a visit of “Etara” – a unique open air museum recreating the way of life of the Bulgarians in the 19th c. It is a great attraction for tourists, one of the most visited places in the country.

Departure to Kazanlak – the capital of the Rose valley. The road to Kazanlak passes by Shipka peak, where is situated the monument of the Bulgaria’s liberators from the 19th C. There is a wonderful view to North and South Bulgaria from the monument’s top – over 1100 m above sea level. You will learn more details about the crucial battles, which changed the course of the Russian-Turkish war in 1877-78. On your way to Kazanlak, in the village of Shipka is the Russian church, where concerts with Church Slavonic music are often performed. In Kazanlak you will visit the Museum of Rose, where you can see how the famous Bulgarian rose oil (used in the perfumery) is made. Next is the Thracian Kazanlak tomb dating back to the 4th c. B.C. It is listed in the world natural and historical heritage of UNESCO. In the Historical museum you will see the recently golden mask of the Thracian king Theres and the bronze head of the King Seuthes III. Late in the afternoon – a drive to Plovdiv, accommodation, dinner and overnight in 4* hotel.

After breakfast – city tour of Plovdiv, founded in IV century B.C. by King Philip of Macedonia. Visit to the old part of the town with the Ethnographical Museum, the St. Constantine and Elena church, the Antique Theatre and the Roman Stadium.

In the afternoon – departure for the ancient town of Nessebar, located on the South Black Sea Coast. The town is listed in the UNESCO world heritage. Enjoy the pleasant atmosphere of the ancient architecture and the romantic narrow streets. There are more than 40 churches in the town, dated from different periods, visit of two of the most well preserved churches – St. Stefan and St. Spas.

Accommodation, dinner and overnight in a 4* hotel in Nessebar.

After breakfast – departure for the South border of Bulgaria. On our way – visit of Ropotamo Reserve – one of the most exotic places at the Black Sea Coast of Bulgaria. One hour boat trip down the Ropotamo River to its mouth at the sea – possibility to meet wild animals, unique rock figures, rare plants.

Departure to Istanbul. Accommodation, dinner and overnight in a 4* hotel.

After breakfast – panoramic tour of Istanbul – a city on two continents, an Emperors’ Citadel and a guard of the secular Turkey of today. Visit of the Blue Mosque, the Hippodrome, the Egyptian Obelisk, the St. Sofia Church, the Sultan’s Palace Topkapi and the famous Grand Bazaar (or Covered Bazaar, Kapalıçarşı in Turkish) in Istanbul.

Dinner with rich show program and oriental dances in one of the popular music-halls in the city. Overnight in the hotel.

After breakfast – boat trip in the Bosphorus – the straits which divides Asia from Europe and connects the Black Sea with the Sea of Marmara.

Departure for Greece. Arrival in Kavala late in the afternoon and accommodation in 3*+ hotel. Dinner in a fish restaurant at the sea shore. Overnight in the hotel.

Day 8 – Kavala (A Wharf of the Fishermen)

After breakfast – city tour of Kavala with the following accents: Neapolis Fortress, the Virgin Marry Church (where the first Christian lady has been christened), the Castle of Mehmed Ali (a viceroy of Egypt, the leader of the Egyptian army), the Aqueduct, the Old city of Philipi and the Harbour with the numerous fishing boats. Lunch.

In the afternoon – departure to one of the biggest port cities of Aegean sea – Thessaloniki. Accommodation and overnight in 4* hotel.

Day 9 – Thessaloniki (The Capital of the Northern Greece)

After breakfast – city tour of Thessaloniki with visit of the White Tower – symbol of the city, the extensive Byzantine walls of the Upper City, the Triumph Arc, the famous St. Dimitаr church (patron saint of the city) and other sights of the city. Free time for shopping on the main commercial street Egnatia. Dinner with entertainment program in a typical Greek tavern in the old part Ladadika. Overnight in the hotel.

After breakfast – free time in Thessaloniki and departure to the Former Yugoslavian Republic of Macedonia. On the road – visit of the old capital of Macedonian Kingdom – Pella, founded by Philip II of Macedonia. Arrival in Ohrid – one of the most beautiful cities in the Southeast Europe, located on Ohrid lake, which is listed in UNESCO world heritage list. Accommodation, dinner and overnight in 4* hotel.

After breakfast – city tour of Ohrid: the Samuil’s Fortress, the Antique Theatre, the churches St. Sofia, St. Joan Kaneo and St. Kliment. In the afternoon – visit to the St. Naum Monastery, located on the Ohrid lake. Dinner in a folklore restaurant with typical meat BBQ and folklore program. Overnight in the hotel.

Day 12 – Skopje (The Capital of Macedonia)

After breakfast – departure for the Macedonian capital – Skopje via Bitola and Prilep. Visit of the old town Hearklea near Bitola. Lunch. In the afternoon we will reach Skopje. Panoramic tour around the city with visit of the old town. Accommodation and overnight in 4* hotel.

After breakfast – set off to Bulgaria. On the way we will visit the Rila Monastery, founded in 10th c, it was the biggest Bulgarian medieval spiritual centre with a great collection of icons, wall-paintings, old-printed books. The monastery is a monument on the UNESCO list of world heritage.

Arrival in Sofia. Accommodation dinner and overnight in 4* hotel.

After breakfast – city tour around Sofia. The Bulgarian capital is a 8500 years old city called “My Rome” by the Emperor Constantine the Great. Visit to the most interesting historical sights: the National Museum of History, the Boyana Church – one of the few complete and perfectly preserved mediaeval monuments testifying to the significant contribution of Bulgarian monumental painting to European culture in the Middle Ages. The church is located in the foot of Vitosha mountan and is inscribed on the UNESCO World Heritage List.

Back to the city center where we will see the Ancient Serdica, the rotunda church St. George (dated IV century AC), the mineral springs, the antique Roman theatre dated III-IV-th century (the time of the Emperor Constantine the Great) and the St. Nedelya sqare, where 4 temples from different religions are located next to each other: The Catholic church, The Ortodox church, The Synagogue and The Mosque are forming quadrangle, which symbolize the peace between religions in Bulgaria. Next is the Alexander I square where the Royal Palace and the National Theatre are located, “Tzar Osvoboditel” boulevard, the Parliament, the Church of “St. Sofia” (the name means wisdom), which had given the name of the city, the Sofia University and the “Alexander Nevski” cathedral (the biggest Orthodox temple on the Balkan peninsula). 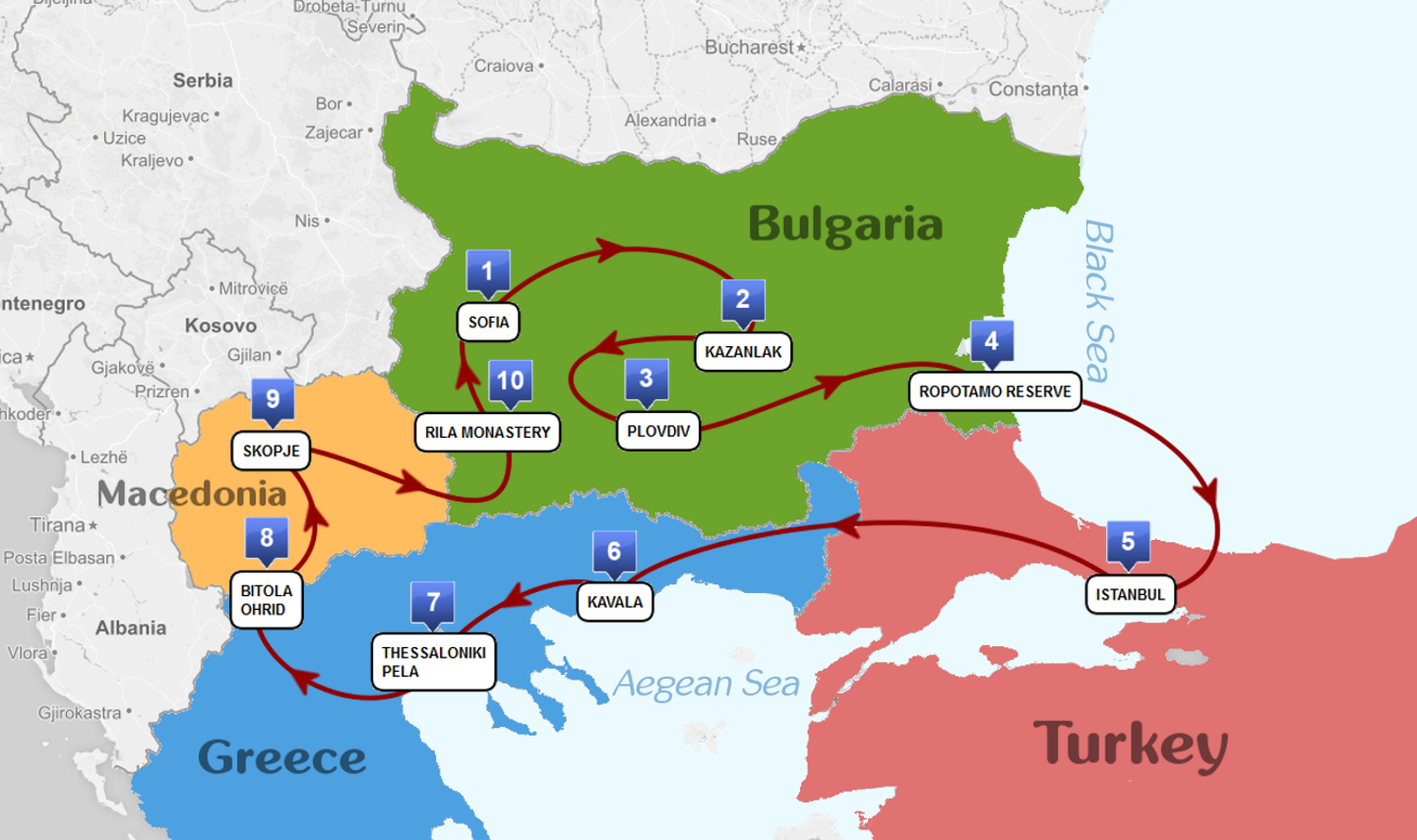